Maybe. It’s just from the ice outside. And the snow. And the negative degree windchills.

In case you missed the headlines, the snow day pictures, or just are living on a warm island and bathing in the sun:

Winter has finally came in Memphis. 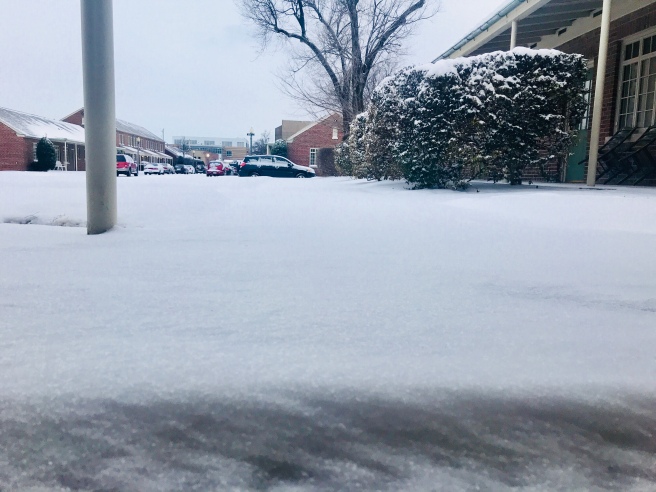 This past Friday this city shut down as it was covered in a blanket of white and ice. Ice is the worst for southerners. I’m originally from Chicago, where the people are used to snow, ice, freezing windchills. But for the folk below the mason Dixon line, everyone is rushing for bread and milk when they hear the words “winter advisory” (why bread and milk, idk, but they do). And rightfully so, as southern cities such as Memphis are not equipped for these conditions, since historically this is not a seasonally occurrence.

Then on Tuesday, winter came again. This time it was actual, pretty, white, and fluffy snow. But it also didn’t rise above 15 degrees. So again, the city shut down as the streets were frozen solid.

Teachers across the city, danced, cheered, and/or pressed “continue” when Netflix asked if they were still watching. Students are celebrating. People are posting themselves or their children playing in the snow or snuggled up to a warm fire drinking hot chocolate.

But some are out of work because the streets are too icy. And guess what, they’re not getting paid.

Some people don’t have heat.

Some people don’t have the luxury to just stock up on milk and bread.

Some don’t have coats. Blankets.

So as we joke around, sleep in, and lay around the house- let’s stop and think about the things that we have and what we are taking for granted.

Some would say these are simple, human necessities. Every person should have access to these. But not every person does.

Memphis has quite a population of homeless individuals and families. And then there are families who technically aren’t homeless but don’t necessarily have heat at home, or homes that are up to code or standard.

Many of the Memphis students are on the free lunch program and school, and for some that’s their only meal.

SCS schools and the surrounding districts and charter schools have been out since last Thursday.

How many hungry kids are there?

It’s so easy to get caught up in the beautiful sight of the snow covered buildings and trees. It’s so easy to forget about those who are actually suffering in what we are considering a “beautiful”.

Our world is so caught up in the now, in what they enjoy. We forget that what might be joyful to one person, is actually causing grief to someone else.

In a city that wants to promote change, healing, growth, and a better tomorrow: I see little action or attention being given to those who need it in times of need.

After writing this, I learned there was a woman who died outside of City Hall in Memphis sometime on Memphis. For unknown reasons she found it necessary to leave her home/shelter and sleep in the park outside City Hall. City officials did not express sympathy, and passed it as she was not homeless, and CHOSE to leave her place of shelter. Anyone who chooses to leave their shelter for the cold did not have a choice. We do not know her reasons, we do not know if her choice or decision was influenced by a mental or emotional condition. But we do know she died.

This cold is serious people, and as the schools are closed another day I’m challenging you all to find a way to help.

The Community Alliance for the Homeless will be doing a Point Count to count the number of homeless on Wednesday Jan. 24. They are asking for volunteers to go out and count, but also to help provide basic needs such as gloves, socks, travel sized hygiene products, and a number of other things.

View all posts by Ambielyn